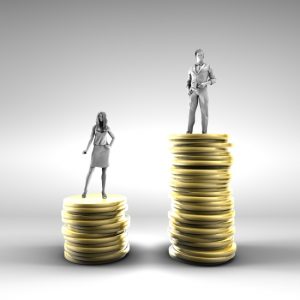 New statistics have confirmed that women in the Netherlands are still earning less than men. In figures that become increasingly concerning as we head into the third decade of the 21st century, the National Salary Survey 2019 shows that men are earning 8% more than women. Though the worldwide gender pay gap had been steadily diminishing between the 1960s and 2000s, since the turn of the century progress has stagnated.

It cannot be easily explained away, since the 8% figure is adjusted, making it the ‘real’ pay gap. This means that even when adjustments have been made for logical differences such as work experience, education or managerial level, this is the figure that remains. If you disregard these adjustments and compare all Dutch men with all Dutch women directly, the pay gap rises to around 19%. And there is a good argument for factoring in these issues – because otherwise you are factoring out a large part of the problem.

There are a variety of circumstances that explain the problem. One of the biggest contributors is that women often interrupt their career or work fewer hours in order to care for their children. Part-time work is a particularly important factor in the Netherlands. The Netherlands has the most part-time workers in the world – most of whom are women or young people. Of course, Dutch law should be up to scratch in preventing this kind of discrepancy. But unfortunately, although the law says that part-time workers should be paid, pro-rata, the same as full time workers, it does not always work out like that. Though most of the time this baseline pay is correctly applied, gaps begin to appear when you factor in things like overtime, travel and clothing allowances.

The problem is exacerbated by the fact that often measures put in place to protect workers end up excluding those working part-time, and the demographics that go with them. In the Netherlands, this is often the case with collective agreements – legally binding contracts between trade unions and employers that are set up to protect workers’ rights. For instance, employees who fall under a collective agreement cannot earn less than what that collective agreement prescribes. But temp and flex workers are often excluded from these agreements, meaning more women than men are left unprotected in this way. It can lead to losing perks and protections such as participation in a pension fund or payment of a thirteenth month.

A common stereotype that also persists is that women don’t ‘put themselves forward’ or ‘lean in’ as much as men in the workplace, and so miss out on progression, particularly in pay. A 2016 survey of 4,600 Australian employees showed, however, that women actually ask for higher wages just as often as men – they just don’t get them. Babette Pouwels, who researched the problem through personnel files, says that ‘employers expect such a request from men, but not from women. For men, the conversation turns quickly to the amount, for women to the question whether the request is justified’. Women are often seen as demanding when they make such requests, while for men it is viewed as a sign of assertiveness.

The gap is not the same throughout a woman’s career. In fact, due to the fact that women are more highly educated than men these days, at the start of their careers they earn more than men. There is a turning point that comes later – a point which experts have called the ‘child effect’. For women working in government, this comes at age 36, for those in business at age 26. This turning point appears as women turn their focus to care responsibilities.

The gender stereotyping of traditional familial roles still persists heavily in the Netherlands, with only 15.1 percent of Dutch mothers working full-time, compared to 79.8 percent of fathers. On average, Dutch women spend 9 hours more per week taking care of the household and others than men. Caroline Criado Perez has argued, in her book Invisible Women, that this ‘unpaid’ work of women is the real underlying problem of the pay gap. And it is not one that is easily solved, even when children grow up. ‘Women are no longer catching up,’ says Peter Hein Van Mulligen, economist at the National Statistics Bureau (CBS), ‘If you haven’t made a big hit before the age of 40, the chance is almost gone.’