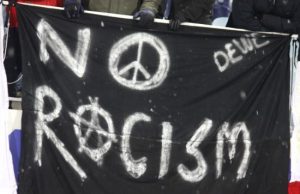 An initiative against racism in football stadiums in the Netherlands is expected to be rolled out in January next year. This has come after the recent racist incident against Ahmed Mendes Moreira during the FC Den Bosch-Excelsior match. In that first division match, Mendes received chants of “cancer black”, “cancer nigger”, “cotton picker” and “Black Pete” from some of the fans of FC Den Bosch, forcing the referee to suspend the match for ten minutes.

The initiative was the result of the discussion between Mark Rutte, Sports Minister Bruno Bruins (VVD), Justice Minister Ferdinand Grapperhaus (CDA), the Royal Dutch Football Association (KNVB) and Mendes Moreira himself. Several measures were proposed. These would have to be implemented by the clubs together with the KNVB in order to protect players against racism during matches.

Cameras and sound recordings
It was suggested that cameras with face recognition and sound recording devices should be installed in football grounds to catch the culprits of racist chants. The devices were also planned to be installed for amateur matches. “In principle, this is legally feasible, although by definition it is a violation of privacy,” said Evert Hoekstra of CKH Advocaten. He believed that the importance of protecting players and maintaining order during football matches trumped the privacy argument.

However, researchers from Tilburg University maintained that the application of face recognition technology violates the law. D66, part of the ruling coalition, voiced concerns about the storing of personal data. It had stated earlier that face recognition and radical algorithms should be prohibited until proper legislation could be introduced.

A camera system would have to be paid for, whether by the clubs or the government. The Chief of Police for Rotterdam, Frank Paauw, said that paying for the technology would be too expensive for the clubs. However, it would be problematic if the government paid for this, since the EU would regard this as unauthorized aid to football clubs.

Compulsory reporting for offenders
Another measure was that known culprits of racist behaviour, who already have been given a stadium ban, would need to report to police before matches, so they could be followed by judicial authorities to ensure they did not enter the stadium. A similar tactic is in use in England, where hooligans are often required to report to the police before matches.

A further suggestion was offering counselling to the offenders, although Hoekstra thought that this would be difficult, since the people who carry out such actions are the type that do not accept counselling willingly.

Stadium bans
It was also suggested that the KNVB should raise stadium bans for troublemakers from five to ten years. Although the KNVB could implement this by itself, football lawyer Christian Visser argued that the punishment should be proportional to the crimes. “Now, there is a stadium ban of five years for attempted homicide. I find this crime to be worse than racist chants,” said the lawyer.

An area ban was also considered. Minister Grapperhaus said that judges in the Netherlands do no often impose severe punishment for racist crimes. He believes that there is a need for changes in the law, like in England, in order to give judges more power to impose area bans. However, football lawyer Visser thought an area ban was a bit extreme. Citing a recent report from the police team on football vandalism, he pointed out that 90 per cent of the 500 football fans who were arrested last year were first-time offenders. In fact, 40 per cent were young men between the ages of 19 and 26. “If I look at the proposed measures, I think the attention to the terrible racism at Den Bosch will have more effect than the current plans of the cabinet and the KNVB.”

Amateur teams want more
In solidarity with Moreira, football matches of professional and amateur clubs throughout the Netherlands on 23 and 24 November started with one minute of silence. Zeeburgia in Amsterdam, a breeding ground for professional clubs, wants the KNVB to do more to support amateur clubs to eradicate the phenomenon.

According to chairperson Marianne van Leeuwen, incidents of racism happen every week, when her players were called racist names like “Black Pete”. “I have experienced that opponents did not shake hands with our players because they said out loud that they did not want to shake hands with monkeys,” she added.

In addition to a new campaign against racism, “Football is for everyone,” to take place in December, Minister Bruins is also contemplating an app that would allow people to anonymously report racist incidents.