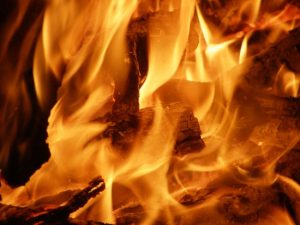 The tradition of bonfires at Scheveningen and Duindorp goes as far back as 200 years. In the mid-nineteenth century, when the Netherlands picked up the tradition of adorning one’s house with a decorated tree for Christmas, a custom that mostly probably spread from Germany to England and then the rest of the Europe, the dried-up trees were later disposed of by burning them. This may have been the start of the annual bonfire tradition in the country.

The practice was interrupted during World War II, only to be picked up again afterwards with even more enthusiasm. At the end of the 1940s, the first New Year’s fires appeared, alongside Scheveningen, in other neighborhoods of The Hague: Spoorwijk, Schilderswijk, Laakkwartier and later the entire city. Groups of youngsters would go around the city hunting for Christmas trees for the bonfire, an activity known as rausen.

The competition among the young was fierce and often caused disturbances. To make the flames reach higher, car tires, furniture and other flammable materials were placed between the stacked Christmas trees. The police usually acted swiftly to keep the situation in control, but often this only managed to escalate the situation.

The regulation of the New Year’s Eve bonfire
It was not until the mid-1980s that the government made an attempt to address the unruliness of the event by setting up party tents throughout the city, attempting to include other people than just the young men. The police themselves brought wooden crates as an alternative to the car tires and other hazardous materials. Before they knew it, the rioters had agreed to some general rules and guidelines.

The old-fashioned Christmas tree hunt was a fun activity, but was banned in the late 80s by the municipality of The Hague due to vandalism, fire hazards, blocking access for the emergency services and other concerns.

The bonfires of Scheveningen and Duindorp
By 1990, the municipality of The Hague had banned all the bonfires in the city and instead proposed to organize a collective one, at Scheveningen Noorderstrand. Most neighborhoods came together and moved the fire to the beach, although some resisted as they missed the excitement of Christmas trees hunt: by now, the pyre mostly consisted of old wooden pallets. Soon, there were two bonfires sanctioned by the local government, one at Scheveningen Noorderstrand and the other at Duindorp Zuiderstrand. The New Year’s bonfire tradition, passed down from generation to generation, no longer caused riots but healthy competition between Scheveningen and Duindorp.

In December 2014, the Scheveningen bonfire was named National Intangible Cultural Heritage of the year. In 2015, the same honor was bestowed upon the Duindorp bonfire.

Prohibition of the bonfire in 2019
That was until last year, when the bonfire at Scheveningen exceeded the permitted 35 meters height limit, reaching 48 meters. Because of the strong winds, sparks flew across the town, causing damage to cars and bicycles, a garage company, a kiosk on the beach and at least one home.

To ensure that the events of last year would not be repeated, this year, the municipality tightened the laws. The height of the pyres was limited to just ten meters and the organizers were made responsible for fire safety and cleaning up afterwards. However, the organizers were unwilling to adhere to the new rules and announced they would continue the age-old tradition.

In Duindorp, the new regulations caused so much opposition that many locals came into violent clashes with police. Since 2 December, the residents have been keeping the ME, fire department and police on their toes. The angry mob, even containing a nine-year-old boy allegedly carrying a Molotov cocktail, has damaged a bus shelter, set waste containers on fire and burned down a snack bar. So far, around 25 rioters have been arrested.

As upset as many residents of the neighborhood are, many say that they are not surprised with the unrest, as their decades-old tradition is being taken away. For now, the fires at both Duindorp and Scheveningen have been cancelled, since the city has stated that the organizers have not applied for permission. The organizers, however, blame the city for not stating clearly what documentation is necessary in order to comply with the rules, so that it was impossible to apply correctly. Whether there will be any fires this year remains to be seen.