Expats that fulfill certain criteria are entitled to a 30% reduction in their taxable income, as well as other advantages relating to moving and settling in the Netherlands. The government has decided to reduce the term of the tax cut period for expats from 8 years to 5 years. State Secretary Menno Snel (D66) introduced the plan a few months ago. Expats who have used up their 8 years in 2019 or 2020 fall in the transition period, and are therefore unaffected by the changes.

Expats whose term finishes in 2021, 2022 or 2023 will not be able to utilize the 8-year term; instead it will decrease to 7, 6 or 5 years, since by December 2020 the transition period will end. From January 2019 onwards the 5-year term becomes the rule for new expats. The cost of the tax reduction for the state is 1 billion euros per year, although in 2016, around 25 percent of the 849 million was given to 2.000 expats (with a total of 65.000 expats profiting from the tax reduction). These expats are in the higher income bracket, who pay around 50 percent tax, and therefore profit more in absolute terms than other expats. They often work for multinationals, universities and ICT companies, and for example as soccer players. These businesses are therefore able to attract highly skilled labor from abroad in this way.

In 2012 the expat tax cut period was shortened from 10 to 8 years. The difference with the current situation is that the government promised expats they were entitled to 8 years. Instead, around 74.000 people are negatively affected by the new changes, according to Jessica Piotrowski, spokesperson for United Expats. This is going against the ‘principe de security juridique’ or in Dutch ‘rechtszekerheidsbeginsel’, which means that the government cannot change its course overnight. If you are one of the 225 expats who is making more than 1 million a year, you are probably not cheerful about this new policy. According to United Expats, a deal is a deal; if that is not the case, trust in the government is damaged. Universities have also sent a letter to the State Secretary, saying the tax cut is vital for attracting expats with specific expertise. Arguments against the tax reduction could be that it creates false competition with Dutch employees, by giving expats a greater advantage over their colleagues. Furthermore, people with higher incomes benefit more from this tax cut. Moreover, other countries also use 5-year terms. It is reasoned, furthermore, that some expats do not stay in the Netherlands for more than 5 years anyway and that those who are planning to remain are not going to leave because of this measure.

A hot topic in Parliament’s finance committee was the abolishing of the dividend tax, which had been announced earlier this year. Mark Rutte’s aim in abolishing the dividend tax was to stimulate job growth and make the Netherlands attractive for companies as an operational base, but his VVD party has been attacked by other parties because of this plan. However, as Renske Leijten of the SP said, it seems that the dividend tax will NOT be cancelled, after Unilever called from London with the message it will keep two HQs in both Rotterdam and London; thus it will not move completely to Rotterdam and the cancellation seems to have missed its aim. Other issues were also hotly debated, especially measures regarding the environment. Helma Lodders of the VVD wanted to stimulate the buying and usages of solar panels fiscally, while Henk Nijboer of the PvdA asked if other measures such as water pumps also should be stimulated. Bart Snels of GroenLinks was in favor of simplifying tax rules relating to bikes that employers can give to employees in order to stimulate cycling to work. Peter Omzigt of the CDA is in favor of an extra tax on diesel, since polluters should pay more. He agrees with Lodders that electric taxis should be stimulated. The question remains how that electricity should be generated; if it comes from coal or gas, it isn’t necessary CO2 neutral. At the moment the use of clean electricity, such as wind and solar power, is still small. Nijboer of the PvdA argued that higher incomes are more accommodated than lower incomes and he was therefore critical of the lowering of the corporate tax, which costs the state 4 billion euros. He did not believe that it stimulates the Dutch business climate and competitiveness. He was further critical of the increase in value added tax for goods and services for the consumer. He agreed with Snels that car tax (bijtelling) should be abolished. Moreover, he questioned subsidies for electric cars, such as Teslas, which receive a 70.000 euro subsidy, since electricity also needs to be generated, as indicated above. Other plans include changing the income tax from four brackets to only two brackets. De hypotheekrenteaftrek, or mortgage subsidy, whereby homeowners can deduct the rent paid on their mortgage from their income before tax, will be further reduced. In 2019 will be 49 percent tax deductible, with a further reduction of 3 percent per year in the coming years. Owning a house means also paying the eigenwoningforfait, a tax based on the value of your house. This tax is lowered from 0,7 percent to 0,45 percent of the value.

Certain tax deductibles will become only partially deductible. This means that the costs for self-employed persons or other legal entities that pay income tax will be affected. Thus it might become more lucrative to start a BV (incorporated business), which has to pay corporate tax. In the coming three years, corporate tax will be lowered from 20 and 25 percent to 16 and 22,25 percent.
If your company made a loss in one year, this can be levelled out with profits from the following years, also called carry forward. The carry forward period is reduced from 9 years to 6. Losses from 2018 and earlier can still be carried forward towards 2027.
The tax for employees leasing a bike tax from their employers is simplified. The company remains the owner of the bike and the employee has to add 7 percent of the price of the bike to their income. Employees can receive 0,19 cent per kilometer from their employer tax free.
For small entrepreneurs the value added tax system is simplified. If your company has a turnover of less than 20.000 euro, you can ask for exemption of value added tax filing. This means that you don’t need to put value added tax on your invoice or file tax reports every quarter. Value added tax will rise from 6 to 9 percent for certain goods and services. Many people have been critical of the fact that the increase also applies to fruits and vegetables.
Under certain conditions, volunteers can receive a tax free compensation, with a maximum of 170 euros per month and 1.700 per year. The tax on natural gas will increase, while the tax on electricity is lowered. The tax on waste is increased.
People with an income of up to 50.000 a year can subtract a bit more from their income before taxes: €3.399 in 2019 and up to € 3.941 in 2021.
The general tax income tax cut (algemene heffingskorting) will be € 2.477 in 2019, € 2.642 in 2020 and € 2.753 in 2021.
Direct investment by foreign companies in Dutch real estate will be made more difficult and tax advantages of the legal entities called FBI’s will be terminated. Instead of paying 0 percent tax on profits, the normal corporate tax will apply.

Some of these tax changes have quite significant effects on certain sectors. Some sectors will pay more taxes, while other sectors will pay less. For employers certain costs are lowered, while for employees taxes decrease. For small business owners and taxpayers in general rules are simplified. Companies will pay less corporate tax. Consumers will pay higher value added tax on products and services, including fruits, vegetables and water. However, certain tax in-centives are meant to make the Netherlands greener.

The expat tax cut period will be shortened from 8 to 5 years. For some expats that means that they are not entitled on 8 years of tax cuts, but only 7, 6 or 5 years, because they started working in 2013, 2014 or 2015. It is strange that this was abruptly decided now, while in 2012 the transition was smooth. Compared to the carry forward rules, in which losses can be carried forward until 2027, even if they occurred in 2018 or earlier, the change for expats is rather abrupt. It is strange that the carry forward rule offers a smooth transition period, while the expat tax cut regulation does not. 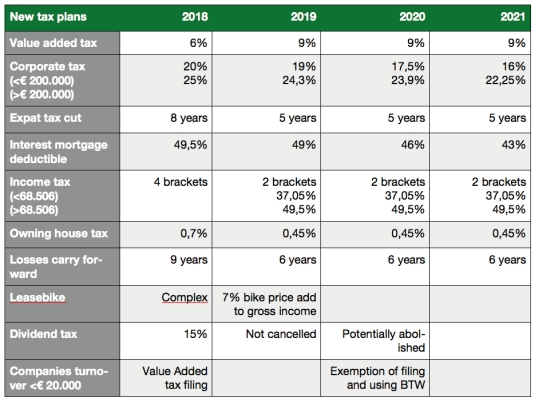